It's been a few months since Moneroj last released an article, as our developers were busy delivering our privacy-focused exchange aggregator Trocador.app. But now it's time to analyze what to expect for 2023. In order to preview this year's behavior, let's look how was last year's action. 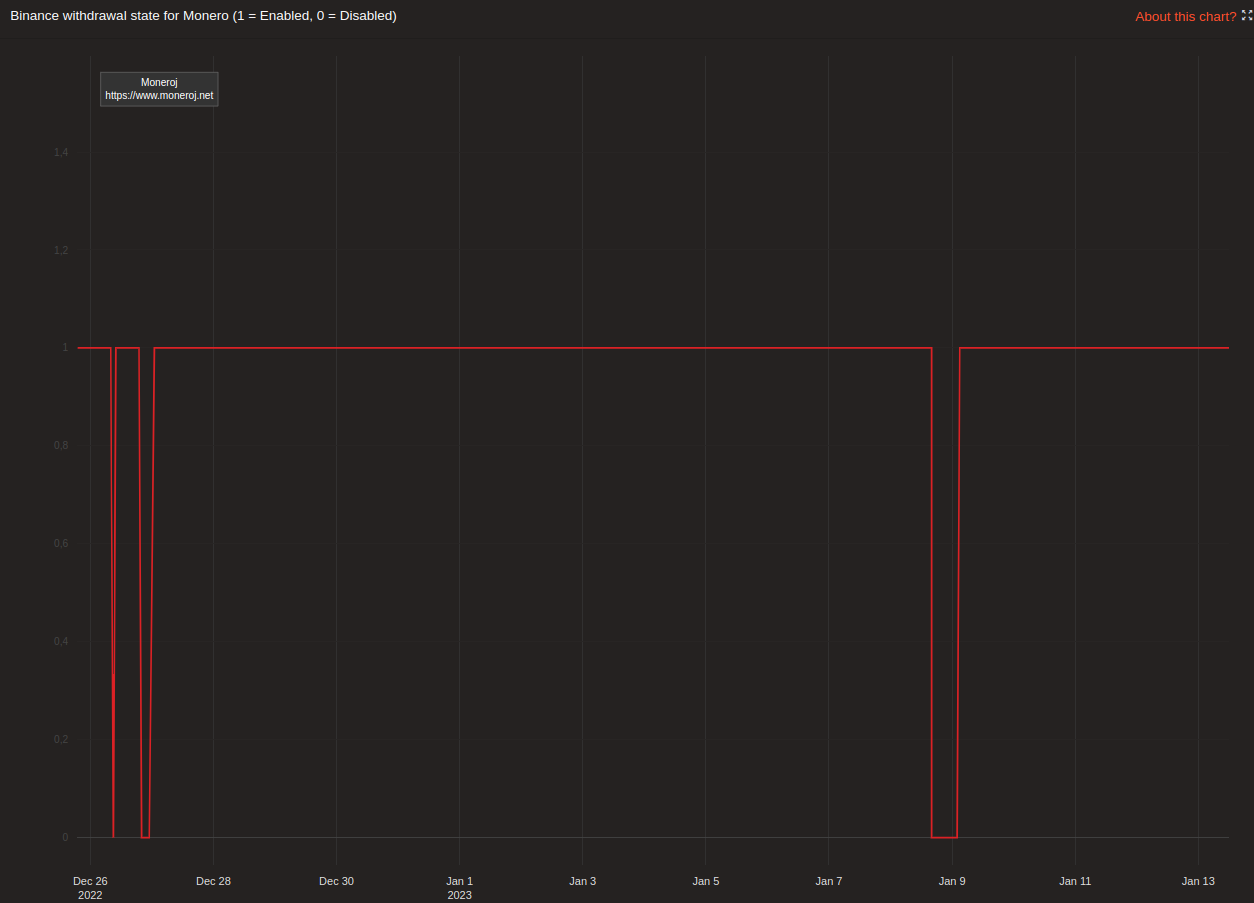 Moneroj.net implemented a way to constantly check Binance withdrawals. Since the implementation on December 25th, Binance has stopped Monero withdrawals three times, twice on December 26th and once for 9 hours on January 8th. Binance claims that it suspends withdrawals to replenish its hot wallet (where withdrawals are processed from). Other users speculate that they don't have the coins they claim to have and interrupt it to wait for the user's deposits. By doing so, Binance might be forcing some users to sell Monero (users can only withdraw money from the exchange via other currencies), which keeps the Monero's price contained. In any case, Moneroj.net will continue to monitor this situation. 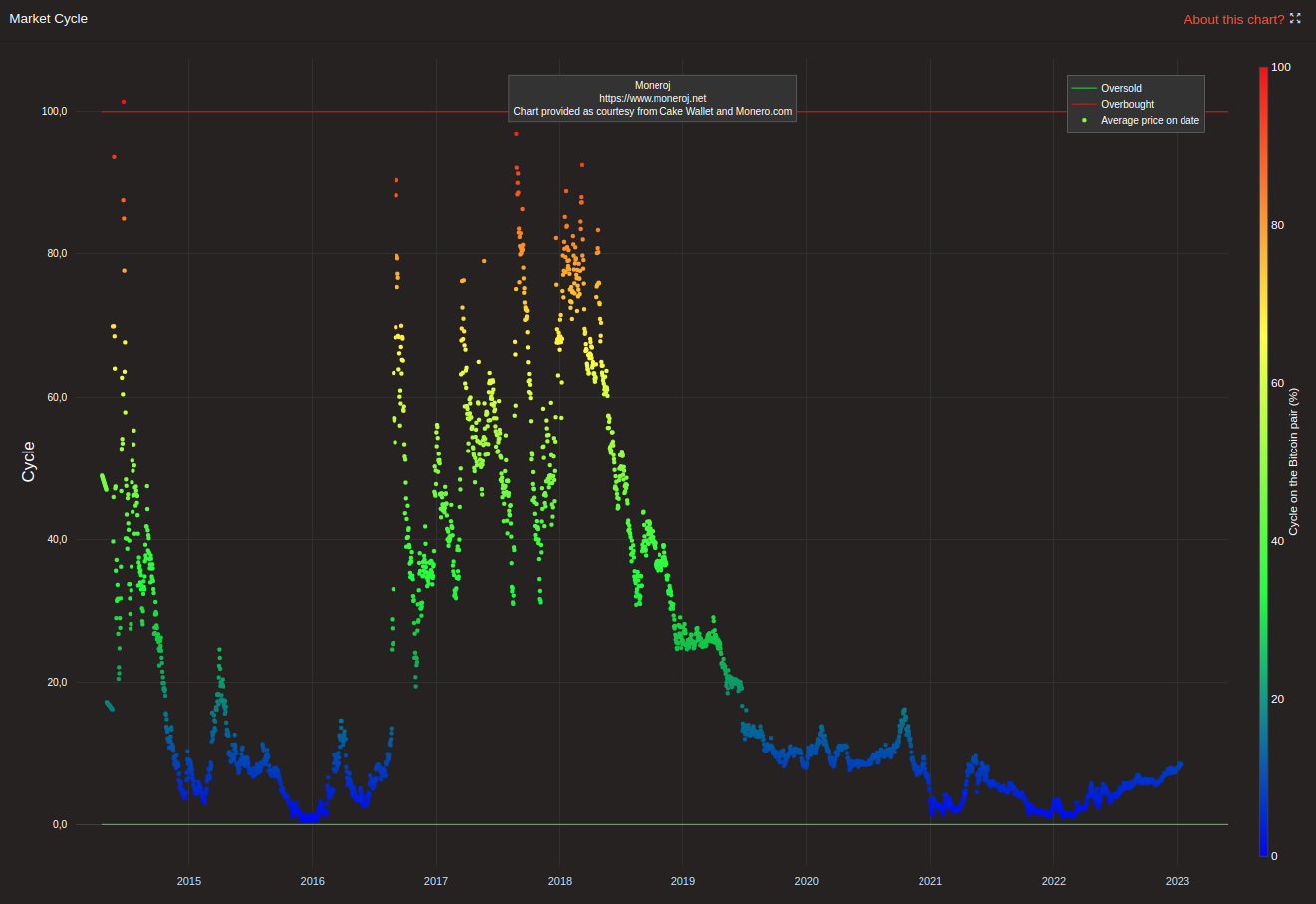 Our market cycle chart indicated a bottom forming against Bitcoin during 2021, and Monero, with lower inflation than its counterpart, slowly rallied in the sats. This bottom is very similar to the currency's first cycle, during the years 2015-2016. Perhaps now, with more people waking up to the need for privacy, Monero can finally be recognized as the legitimate successor to Bitcoin. 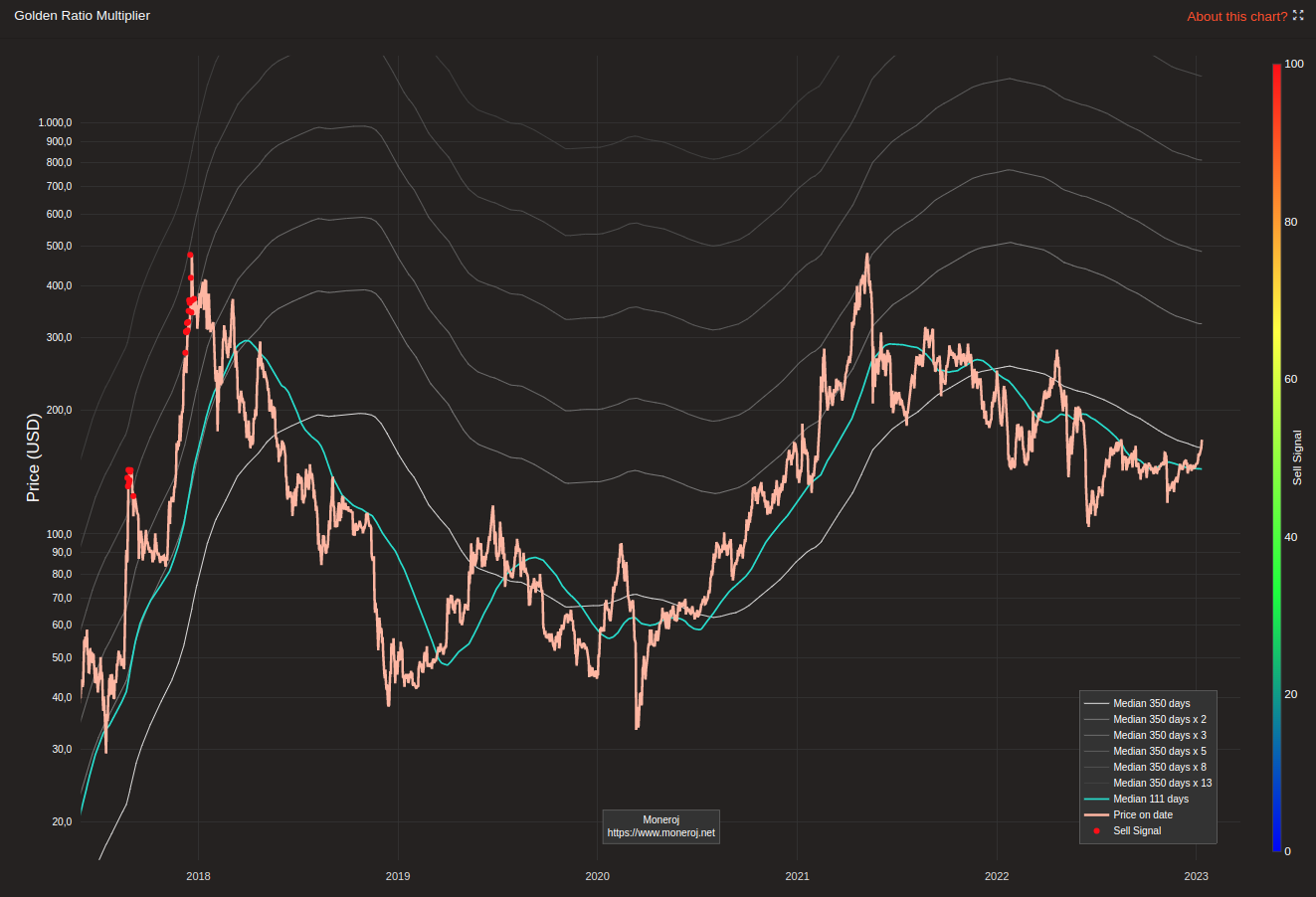 Monero has been suppressed by the 111-day Median for some time now, since peaking in April 2021. After more than a year in the bear market, it was still below the 350-day Median. However, it has now broken out of these two indicators, which could indicate a trend reversal. If it manages to stay above those two, it will float towards the $320 target (2 x 350 day median). A confirmation signal would be the crossing of the blue line above the 350 median, last seen in July 2020. 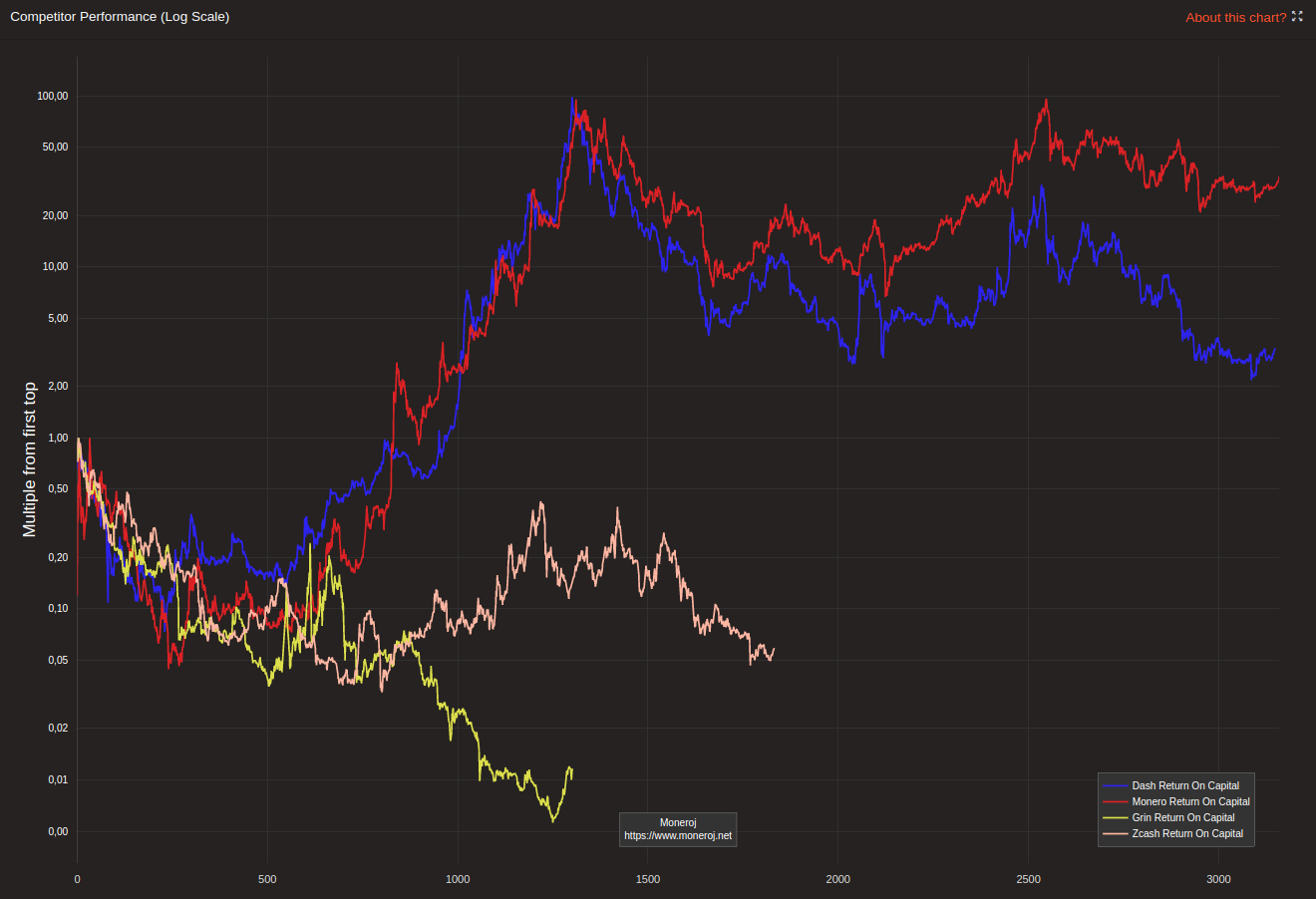 Monero has destroyed all competition on the privacy market, as seen by this chart. Monero reigns supreme, since it is the only anonymous cryptocurrency used, trusted and also has the smallest inflation of them all. 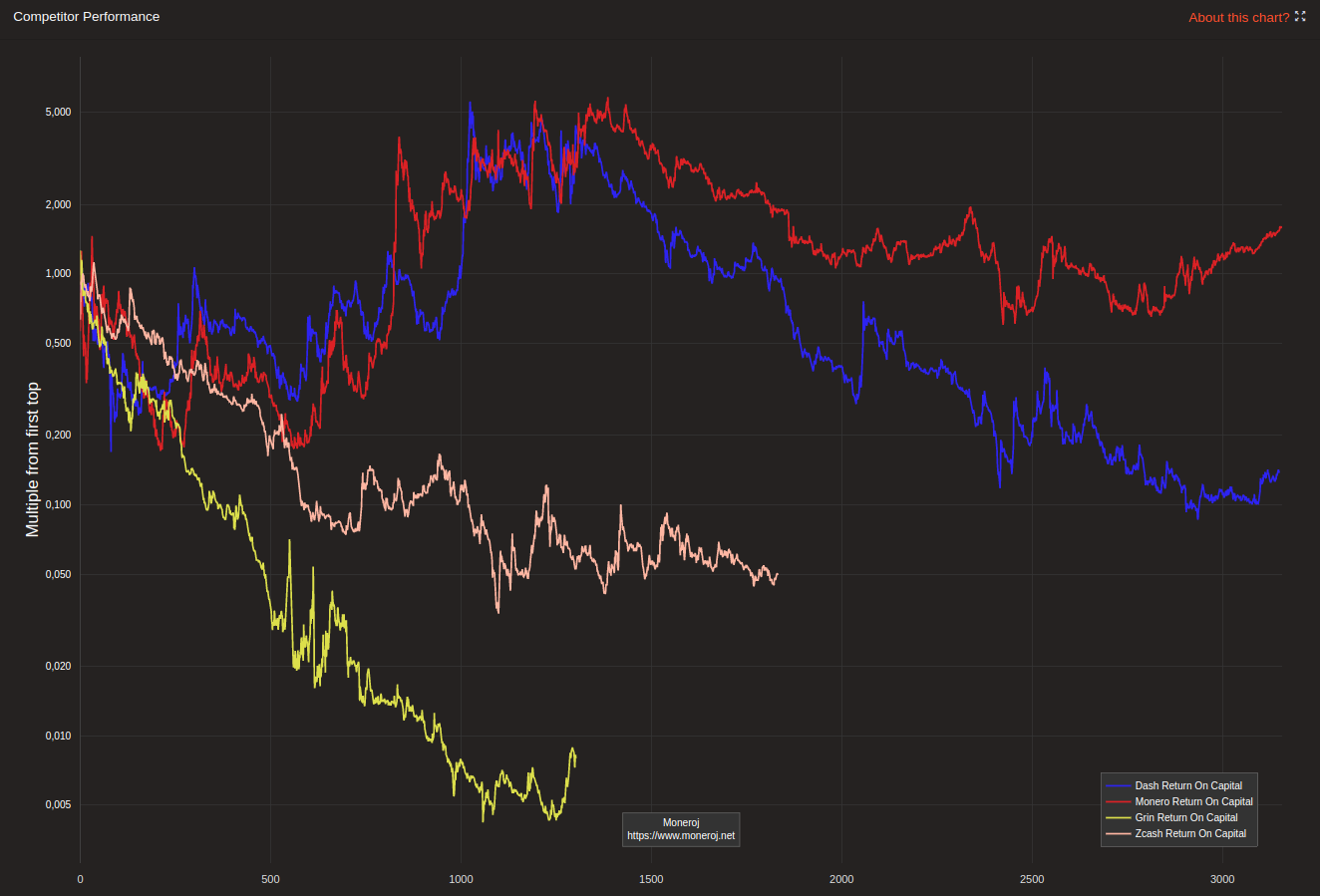 Against Bitcoin, anyone can see Monero has not only been way better than its 'competitors', but also most Monero buyers are in profit. Monero has been making profits against Bitcoin for quite a while now, and the trend shows no signal of slowing. On contrary, it has been harder and harder to find people willing to sell it. 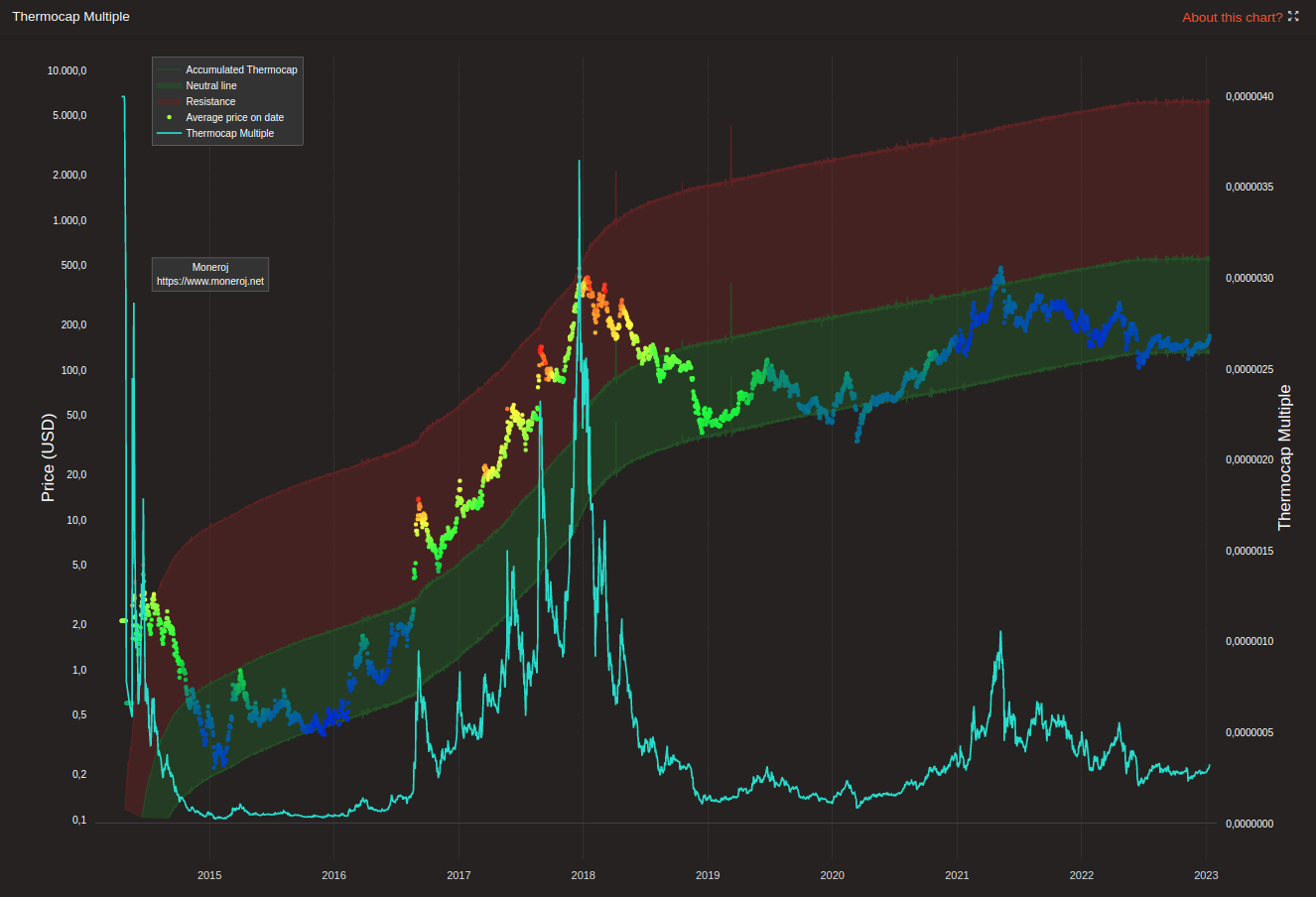 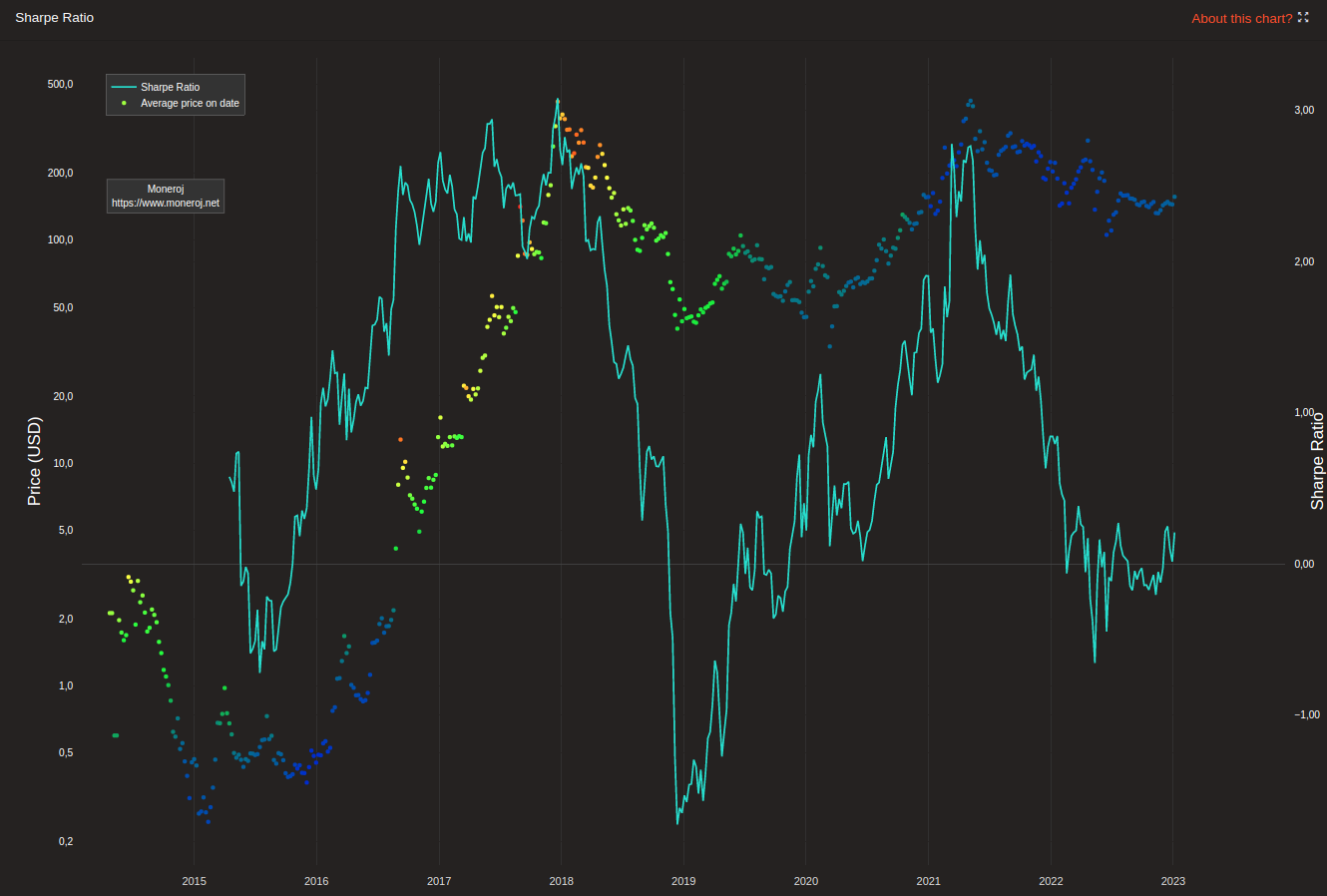 Sharpe ratio has been mimicking the botton between 2015 and 2016 around 0. Bear sentiment seems to be fading. 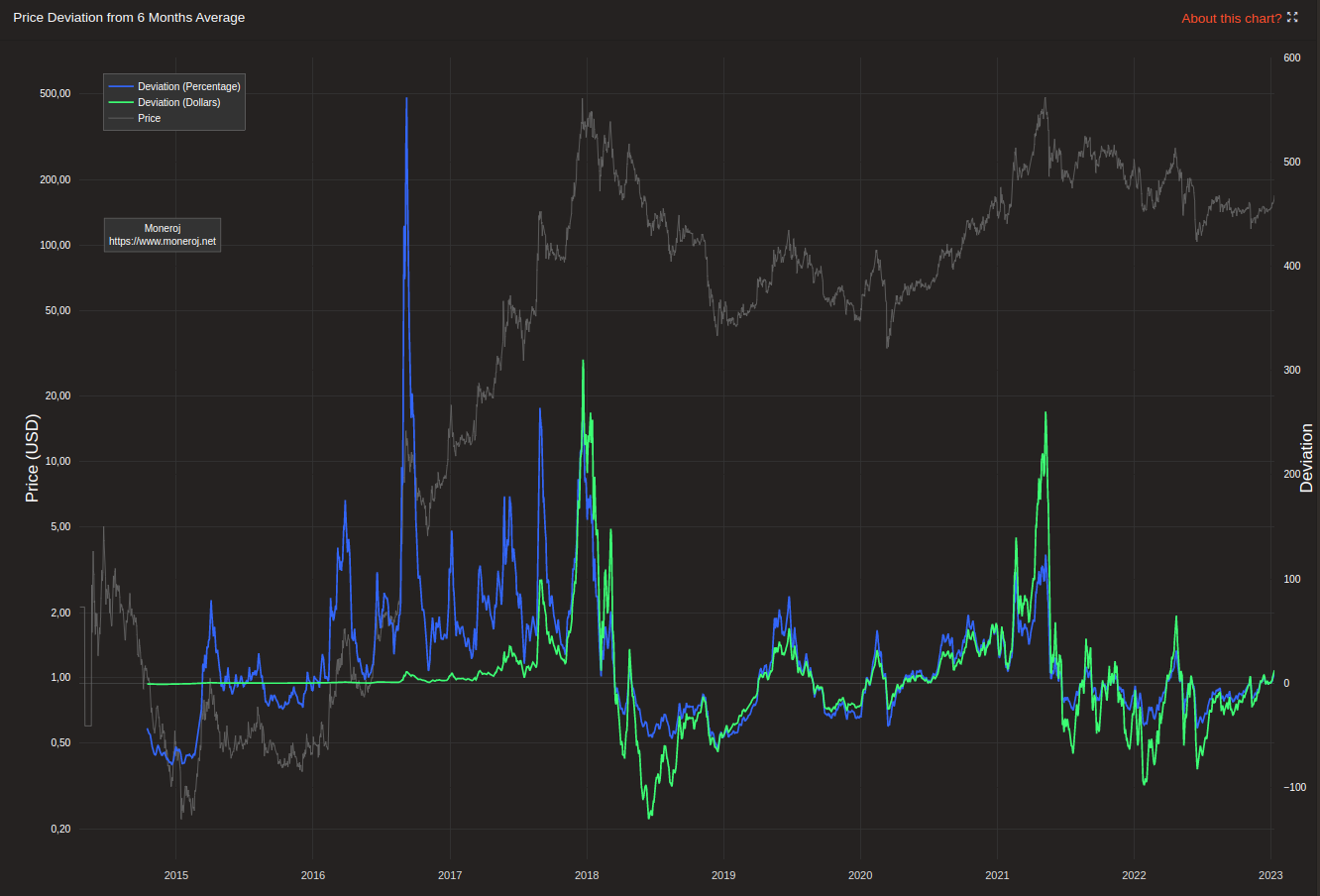 The price deviation indicators clearly seem to be trending to the upside, after 1 year and 6 months of bear. 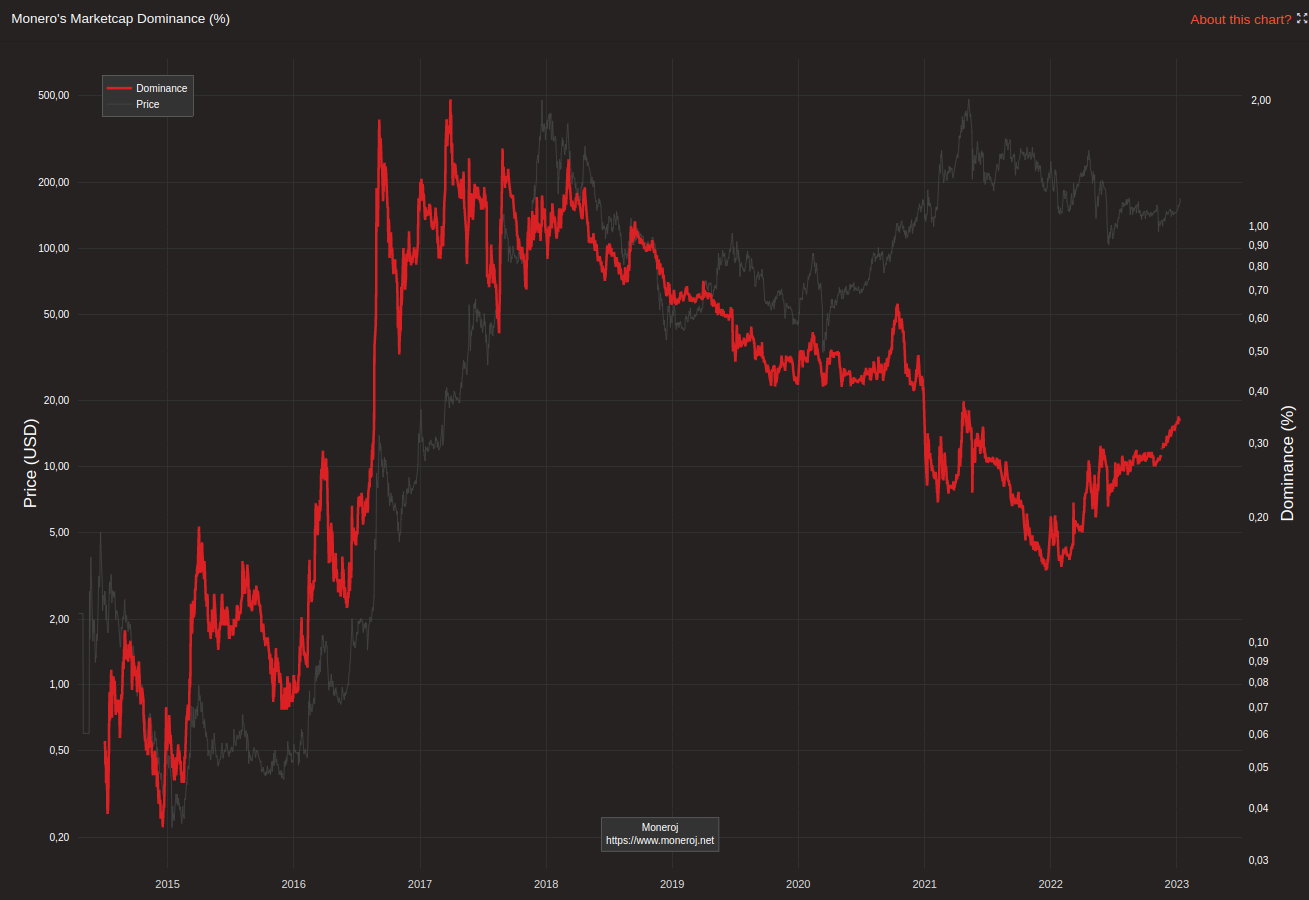 Monero dominance has been increasing during bear market. If investors trust Monero during bad times, why wouldn't them trust it during good times? 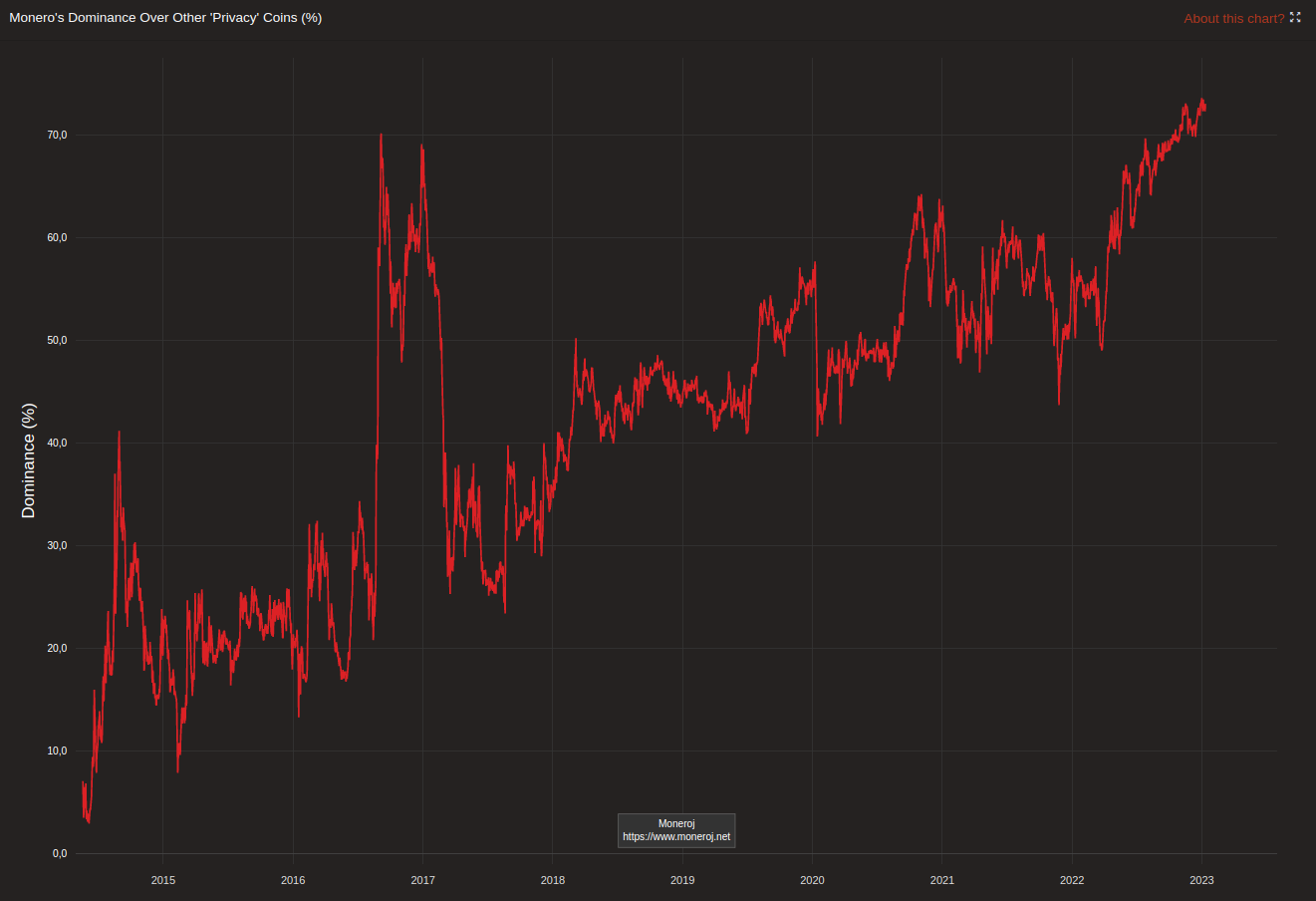 Monero's dominance over the whole privacy market has been trending to 100% since forever. No signs of reversing. 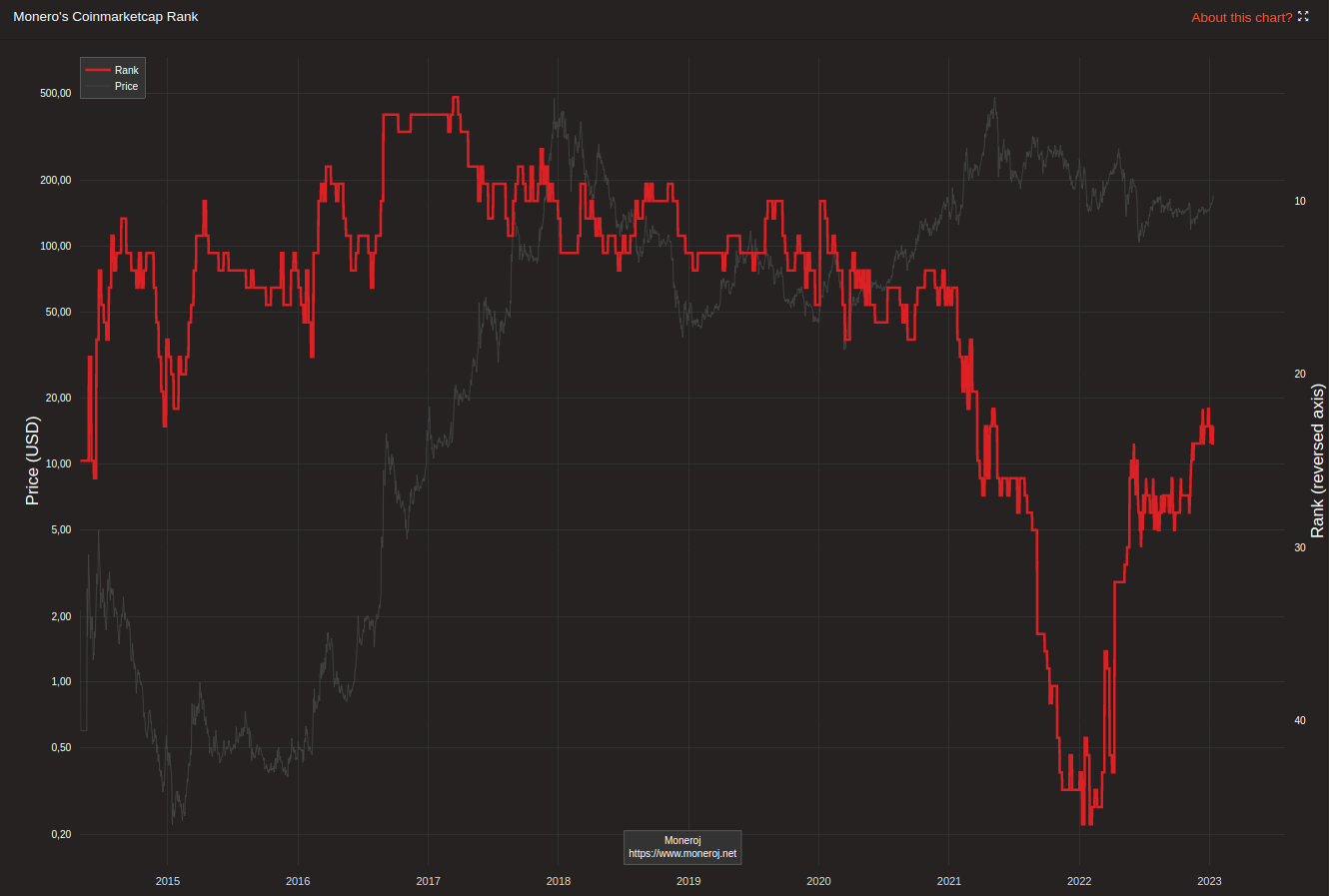 It has done a full (and long) upside down head and shoulders. That's very bullish. 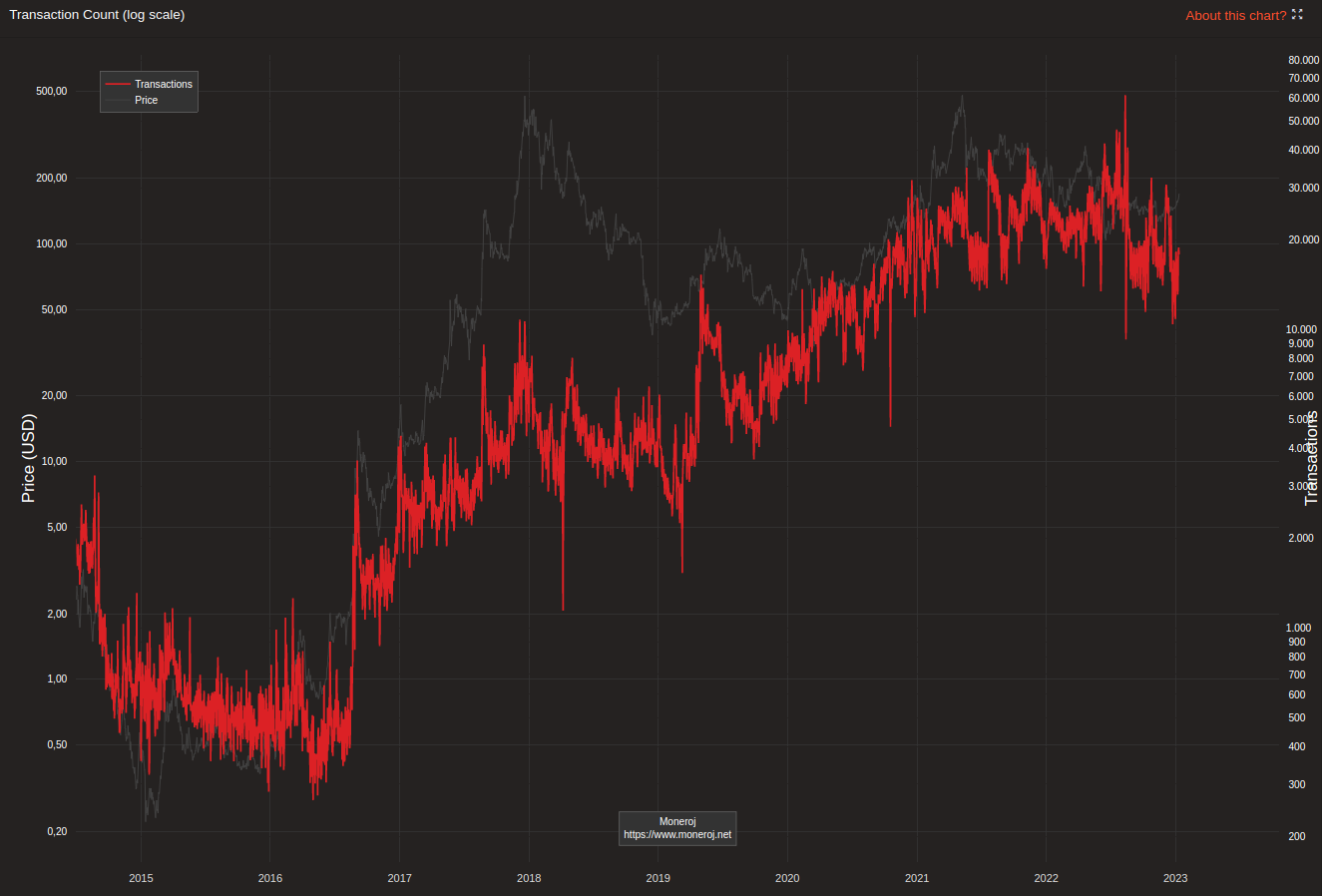 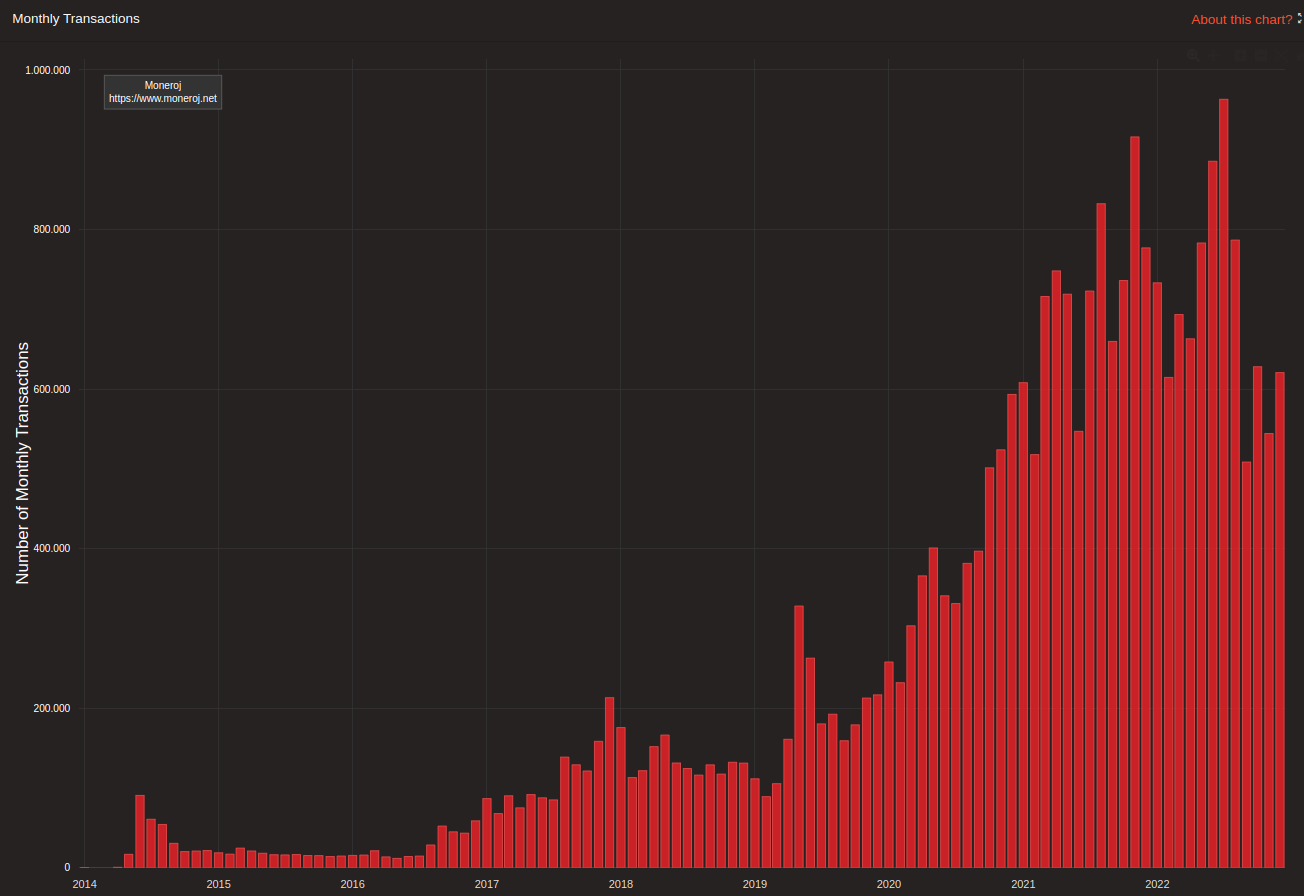 Total transactions have been decreasing since the fork last year, but truth is it has stabilized around what it had late 2020. 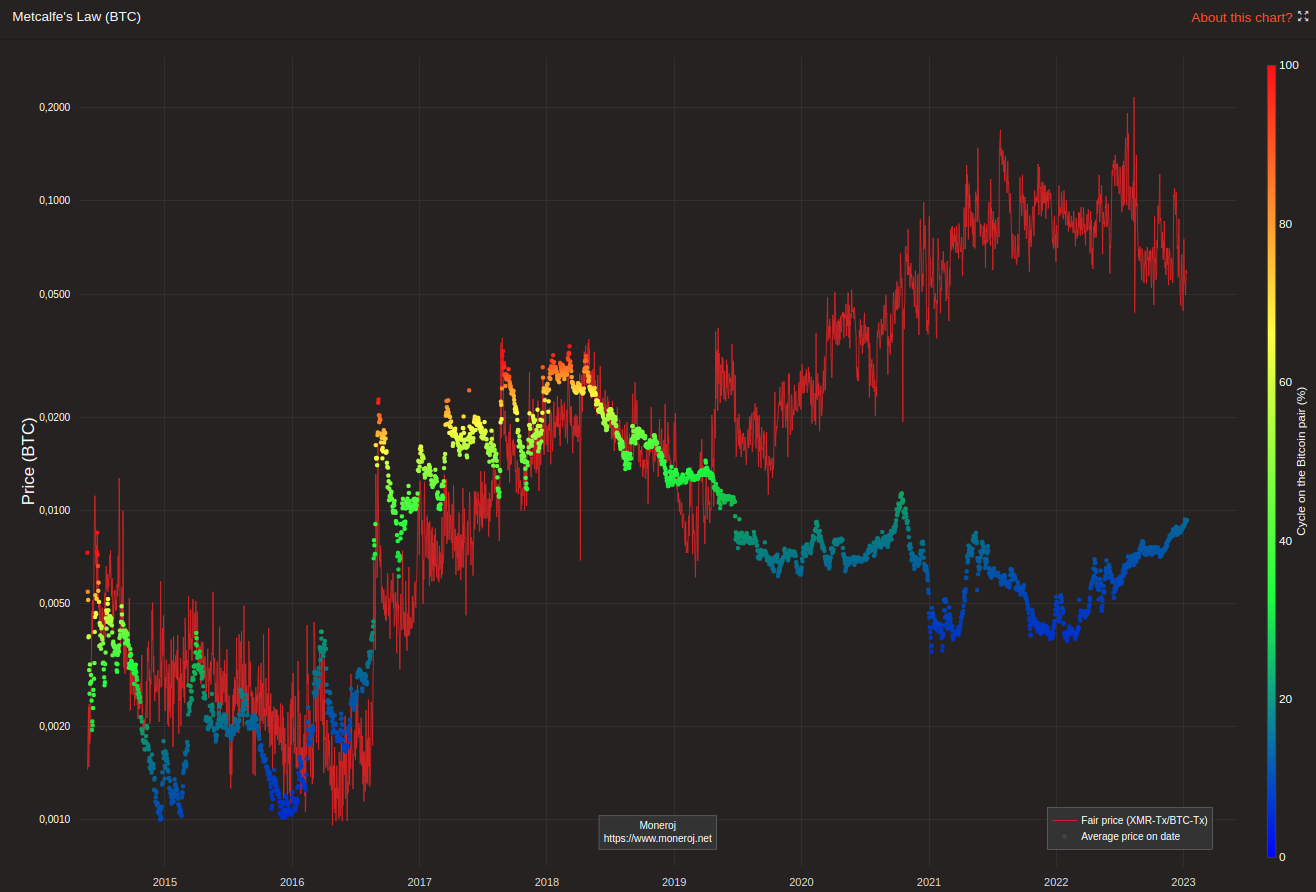 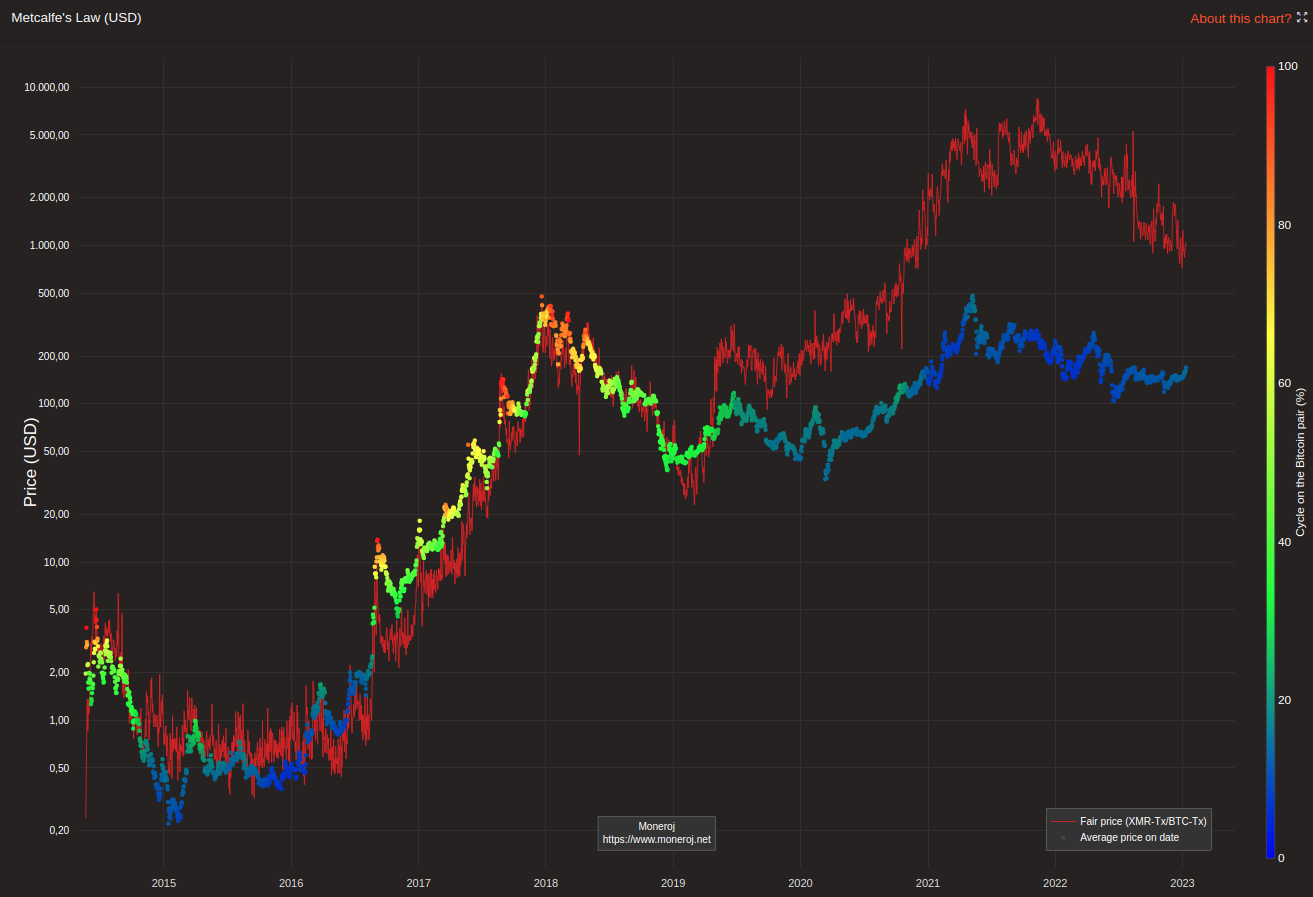 Monero has been trending towards its perceived value (according to Metcalfe's law) against Bitcoin, which is around 0.05 BTC. The same is happening with its USD pair, where the fair value is 1000 dollars. 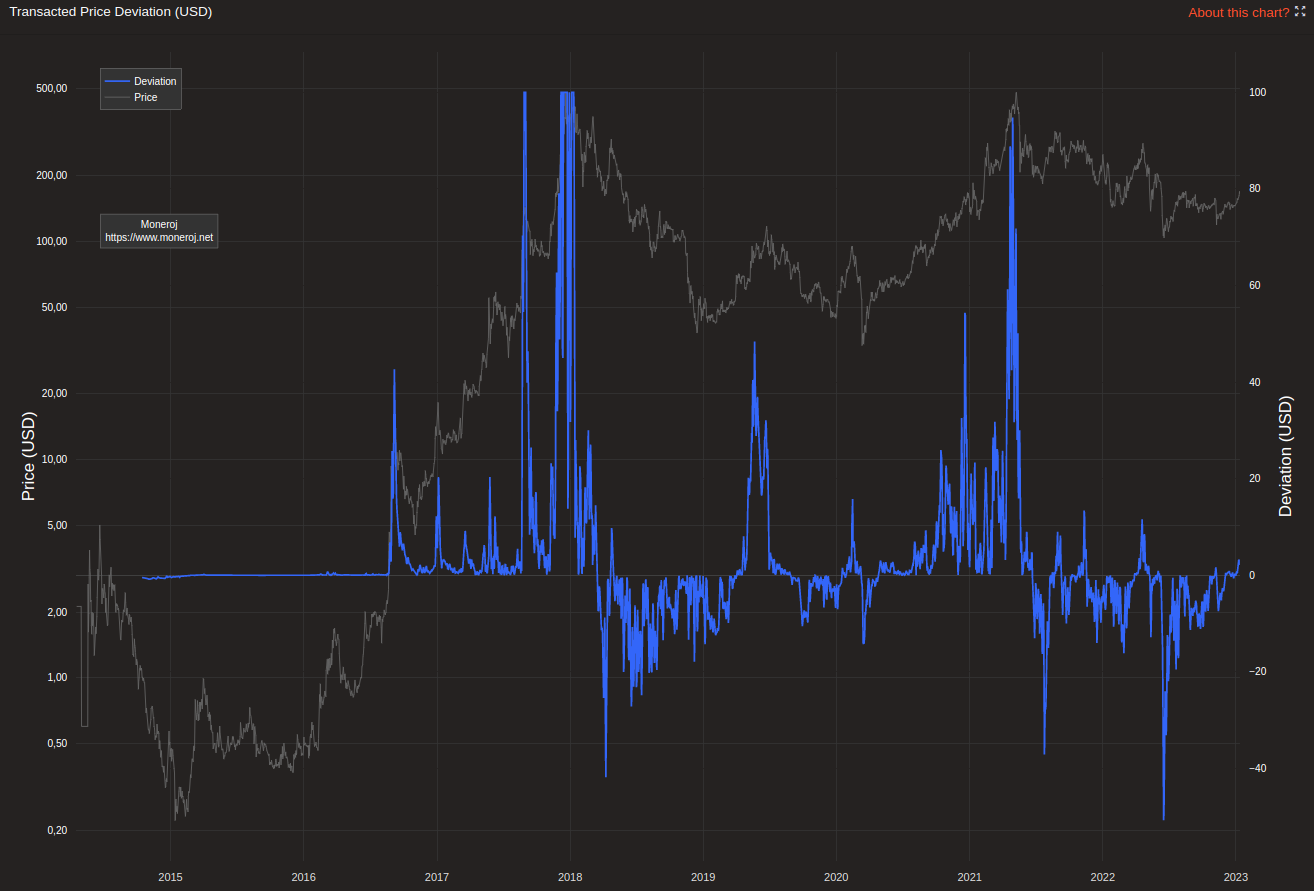 Transacted Price Deviation, which is an indicator that shows when the current sentiment has cooled, is showing the trend is now shifting to bullish, with a clear reversal. 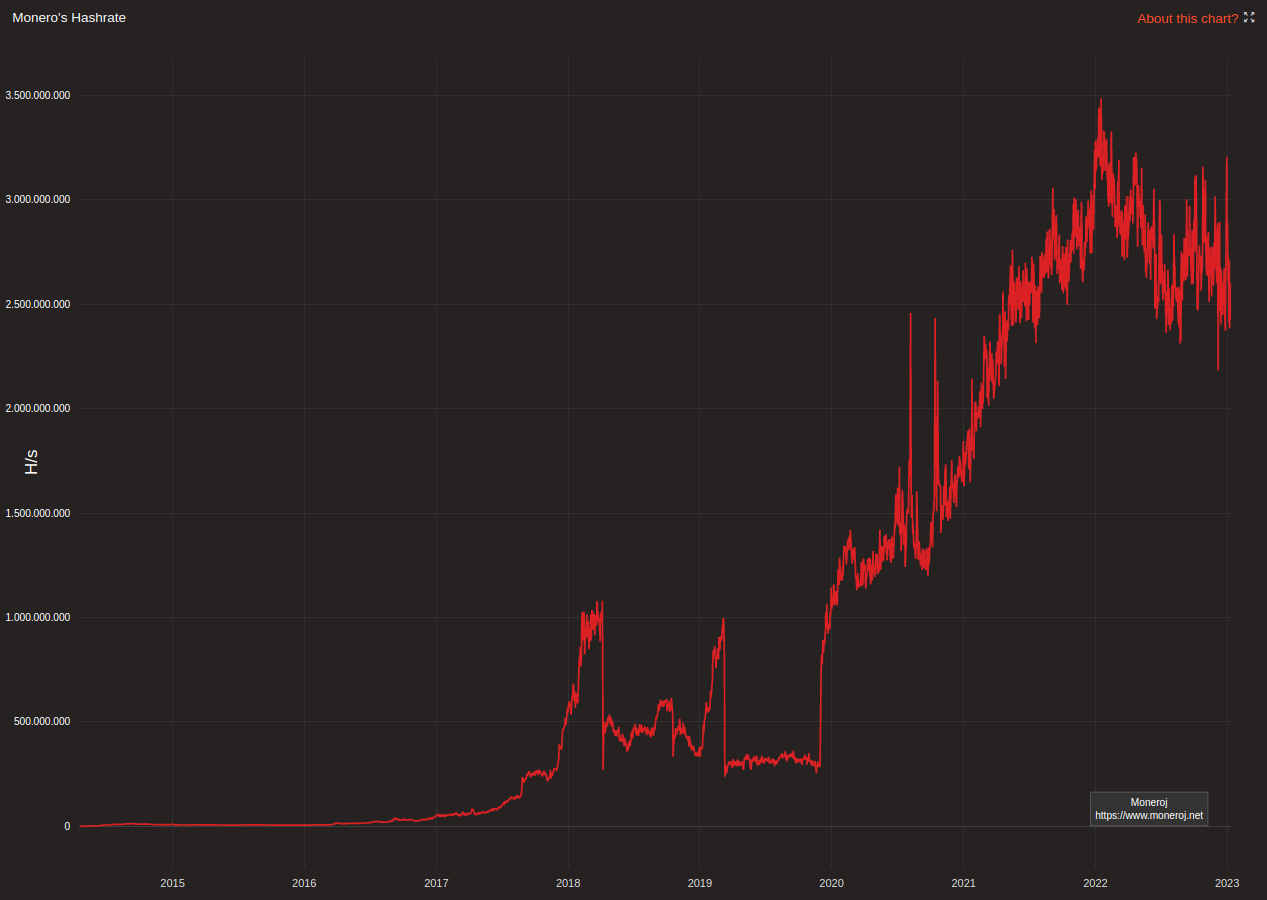 Monero's hashrate fell a third since the price peak, but miners refuse to abandon the operation, desmonstrating confidence in its future. Just for comparison, during the same period Monero's price fell 76%. 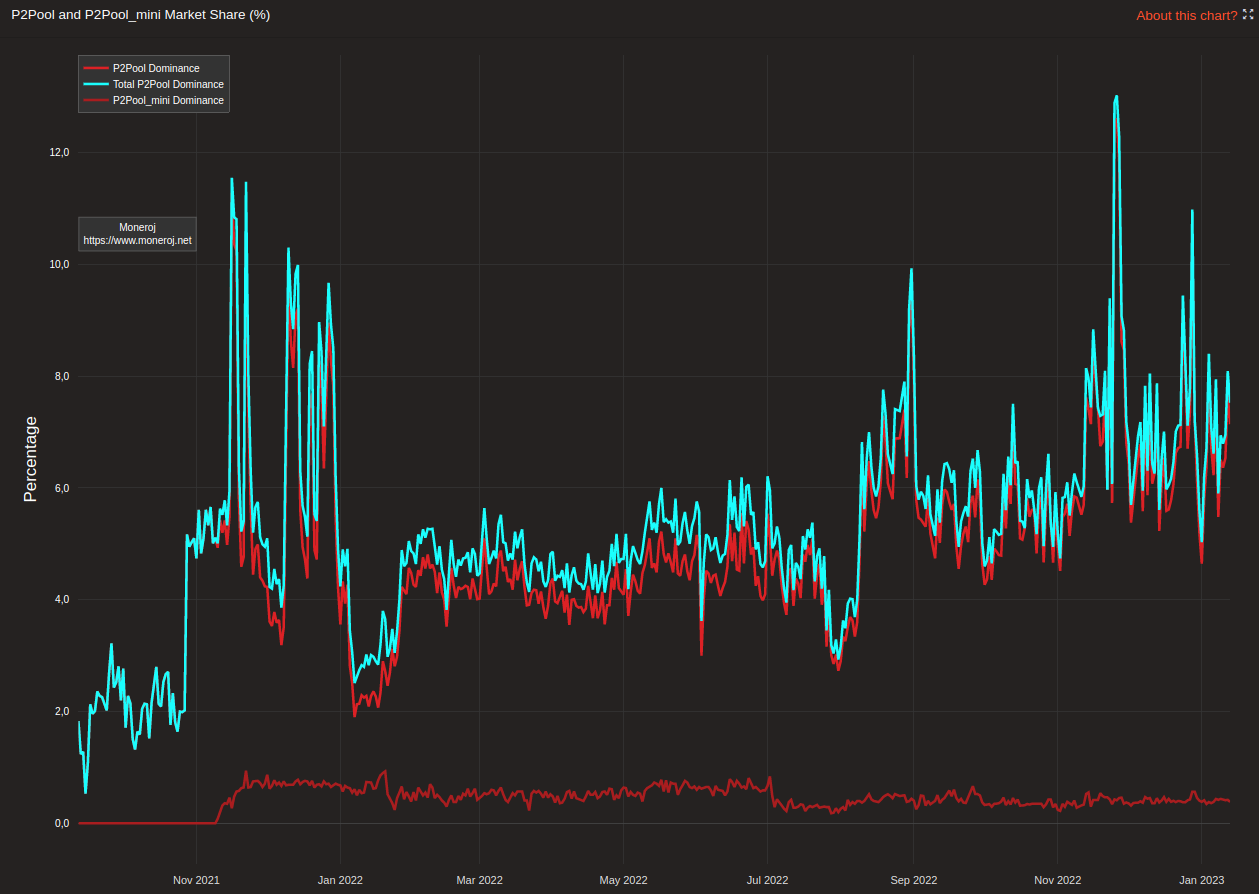 P2Pool mining market share has been slowly climbing its way towards 10%. This trend shows no signs of reversion, which is good for the cryptocurrency, since P2Pool decentralizes mining power, making the coin more resistant to attacks. 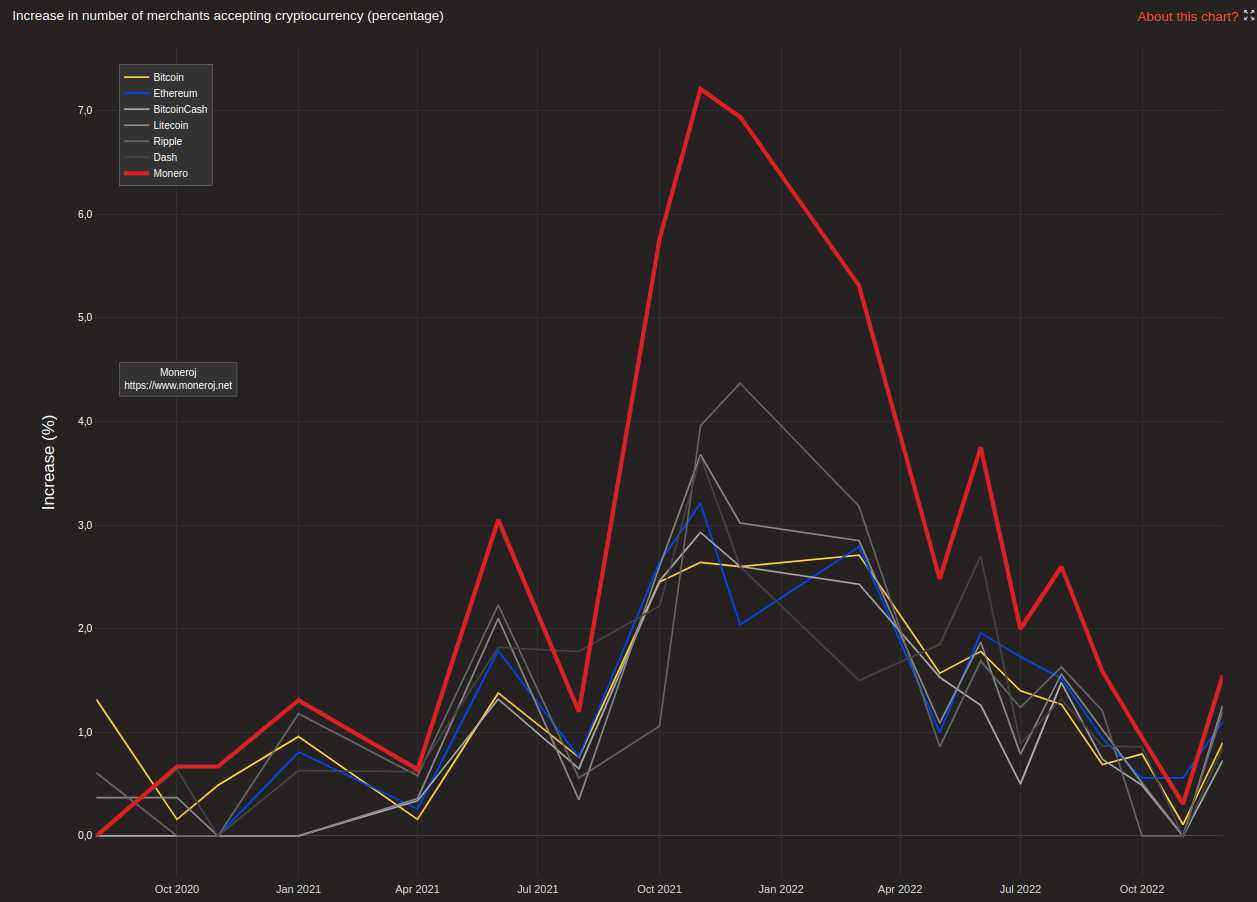 Merchant acceptance has seen a bottom in November, and now all coins seem to have increased their acceptance. In terms of increase percentage, Monero has consistently been the one facing most adoption, almost twice that of Bitcoin. With new payment gateway solutions as Trocador's AnonPay, new plugins for BTC Pay Server, among others, Monero developers intend to spread adoption.

In other interesting topic, Trocador's team has been able to build a payment solution for stores, blogs and any other types of projects. If projects want to receive donations in any form of cryptocurrency, they can now integrate a donation widget to their websites. Users can opt which coin they want to donate, and Trocador promptly converts the funds into the website preferred crypto. For example, the user can donate Bitcoin and the website receives in Monero. Besides that, Trocador also notifies the website owner via e-mail after the transaction is completed.

Users can also generate invoices for their friends, also receiving confirmation via e-mail. You put which coin you want to receive, your friend puts which he wants to pay, and Trocador does all the work. Just generate an invoice at AnonPay Payment Generator and share the link with your friend.

At last, Trocador has also created a payment system, where stores can choose how much dollars (or any fiat) they want to receive, in which coin they want to receive, and the user chooses in which coin he wants to pay. Then Trocador does all the hard work. This is not a complete Payment Gateway because Trocador has not listed fiat currencies yet, but any store can already expose themselves to stablecoins if owners want. The store can, for example, ask for payment in USDT (ERC20) and at the same time allow the user to pay in Monero. If the user wants to pay in the same coin that the store wants to receive, Trocador just displays the store address, so we don't profit from it, but we send the e-mail to the store when the transaction is created.

Another cool thing is that projects can suddenly start accepting any cryptocurrency, even if they just have a Monero wallet. The future will be like this: currencies will be competing with each other and it's not up to us to force users or stores to accept one or another currency. All we need to do is allow both buyers and sellers to use their own preffered form of money. In this sense, Trocador hopes to promote the usage of Monero, which should win the battle for best money. By allowing stores to generate invoices of a certain USD amount, stores dont have to worry about the price fluctuation of their products.

At last, Trocador is in the proccess of adding LocalMonero to their rates, and expect to fully automate trades without needing to create a LocalMonero account, which should also foment Monero adoption. If Trocador's team manage to pull this trick, Trocador might become the first Payment Gateway solution to accept P2P transactions in Fiat. In any case, something cool is cooking for Monero this year. Happy 2023 to all!